‘I don’t like the look of things at all,’ said Sam. ‘Pretty hopeless, I call it—saving that where there’s such a lot of folk there must be wells or water, not to mention food. And these are Men not Orcs, or my eyes are all wrong.’

Neither he nor Frodo knew anything of the great slave-worked fields away south in this wide realm, beyond the fumes of the Mountain by the dark sad waters of Lake Núrnen; nor of the great roads that ran away east and south to tributary lands, from which the soldiers of the Tower brought long waggon-trains of goods and booty and fresh slaves. Here in the northward regions were the mines and forges, and the musterings of long-planned war; and here the Dark Power, moving its armies like pieces on the board, was gathering them together.

The Return of the King, Book 6, Chapter 2 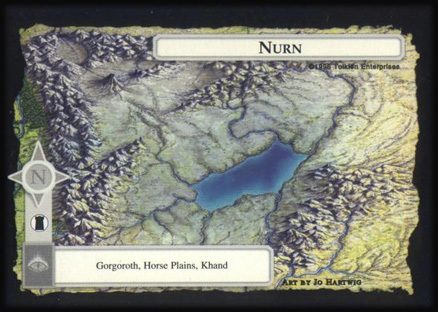 This scenario focusses on the lands of men to the east and south of Gorgoroth, specifically Núrn, the region south of Mordor’s heartland. While the area of Mordor around the volcano of Mount Doom had become a wasteland, the lands around Lake Núrnen remained fertile and were the source of both food and slave labour for Sauron.

At the end of the war Aragorn II “pardoned the Easterlings that had given themselves up, and sent them away free, and he made peace with the peoples of Harad; and the slaves of Mordor he released and gave to them all the lands about Lake Núrnen to be their own.” (The Return of the King, Book 6, Chapter 5). This scenario begins at this point. After these events, Aragorn sends some warriors and diplomats to negotiate peace in these regions and to help drive out the remaining Orcs and Trolls.

This scenario has 4 objectives that need to be accomplished to win:

You automatically lose the game if your wizard is killed or if you failed to accomplish the objectives the second time your resource deck runs out.

There are a few (and mostly minor) new rules or variants in this scenario: 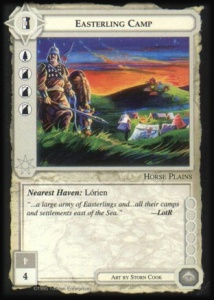 This scenario focusses on the following locations: Minas Tirith (your staring location), Variag Camp (in Khand), Urlurtsu Núrn and Núrniag Camp (in Núrn), Easterling Camp and Raider-hold (in Horse Plains), and Cirith Ungol, where you will have to release some prisoners.

You will also need to include 3 region cards: Núrn, Khand, and Horse Plains. As mentioned above, you need to travel to these regions at least once during the game.

The closest Havens are Lórien and Edhellond, though neither are particularly close or easy to get to. You can travel from a site in Horse Plain to Lórien in a single turn, but you’ll have to travel through three Shadow-lands (and any creatures that you defeat on this journey will not count towards your Marshalling Points). Edhellond is less dangerous to get to, but you can only reach it in a single turn from a site in Harondor.

You’ll also want some sites in the area that let you play items that will aid you either in combat or in influencing factions. In the south, Haudh-in-Gwanûr lets you play major and minor items and has a light automatic attack; Buhr Widu in the north is equally good, and has the added benefit that it is never discarded. Tolfalas, which you pass when you travel to Edhellond from the east lets you play a greater item, as does Dead Marshes, which is easy to reach from Horse Plains. Rhosgobel is a good site to heal, especially if you also have Radagast in your deck. 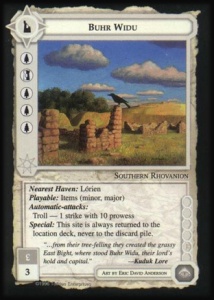 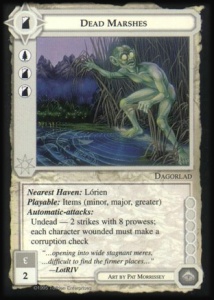 All characters have to be Man or Dunedán, and all have to be either warriors or diplomats (or both). It is advisable to include some characters whose home site is in the regions you will have to regain, since there are no Havens nearby. There are very few (hero) characters that come from these regions, though, and most of them are not particularly powerful: Galva and Haldalam can be played at Shrel-Kain, and Vygavril can be played at Southron Oasis—and that is it…

Aragorn II can’t be one of the characters, as he remains in Minas Tirith to rule.

This scenario does not require a specific Wizard, so choose whomever you like. Radagast is not a bad choice, since his home site, Rhosgobel, is relatively close by. Though most of the regions you will travel to are not Wilderness regions, you can easily turn them into Wilderness with various resources, as outlined below. Since the two closest Havens are far, you could also use Alatar, and keep him in Edhellond to bring new characters into play, but have him teleport to any company that could use his presence.

My starting company consisted of Faramir, Mablung, Beregond, and Imrahil. I figured Aragorn would assign this mission to both Faramir—an accomplished leader, warrior, and ranger—and Imrahil—Prince of Dol Amroth and respected diplomat as well as a great commander (he led Gondor’s Army, when Faramir was wounded). Mablung served under Faramir in Ithilien, and Beregond was appointed captain of the White Company, Faramir’s Guard, so it made sense to send them along with Faramir. (In every game of this scenario I’ve played, I kept Mablung in Edhellond while the rest of the company travelled around, so I could easily bring new characters into play whenever I drew them.) 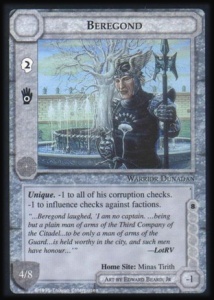 You have two main objectives in this scenario: defeat creatures in combat and influence Factions. Your resource deck should be tailored to those two aims. When you begin deck building, keep in mind that this is a 2-deck scenario. Keep your resource deck small (not more than 40 cards), and keep in mind that you’ll be able to discard cards you need to win the first time you play through your deck.

There are three Factions you have to gain: one each in Núrn, Khand, and Horse Plains. The obvious choices are the Factions Núrniags, Variags of Khand, and Easterlings, but you could also use Wain-Easterlings, if you have that Faction—it is slightly easier to influence, but Wizards have a great disadvantage.

Some of these Factions are immensely difficult to influence—Núrniags need a roll of 14 or more! Therefore, you’ll want to include resources that help with influencing Factions (Old Friendship, New Friendship, A Friend or Three, Lordly Presence, Tempering Friendship, and so on). 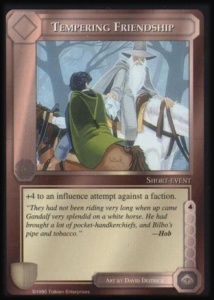 For resources playable at sites, you can consider the following. Rescue Prisoners is, of course, a card you have to include (and you’ll need at least 2 to win). Noble Steed is too thematic not to include, and will likely prove very helpful. Twice-baked Cakes can be played at several of the sites you have to visit, and can help you reach a Haven more quickly when members of your company in the east get wounded. Horn of Anor is a useful minor item to gain factions. Since you will have to engage in a lot of combat, make sure you are able to collect a few good weapons and armour along the way as well! At the two sites in Núrn (Núrniag Camp and Urlurtsu Núrn) you can gain Information, but I have not found a convenient use of this yet in this scenario. 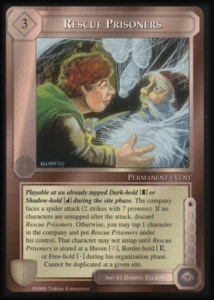 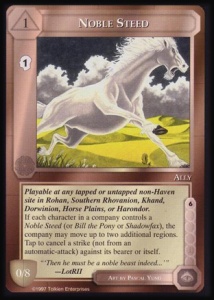 Harad and Rhûn both make it easier to move in this part of Middle-Earth. They link various regions in the south and east and give you a site path of 3 Wildernesses (thus avoiding the more dangerous Shadow-lands or Dark-domains). Fair Travels in Shadow-lands makes this also easier, particularly in combination with Gates of Morning. Mountains of Shadow will allow you to travel more easily to Núrn. 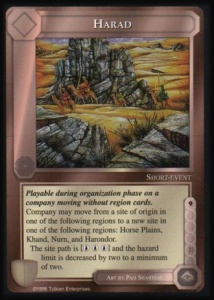 Fog, Quiet Lands, and Moon also help to lessen the dangers in Shadow-lands, by turning them into Wildernesses, but two of these will require Gates of Morning for this. 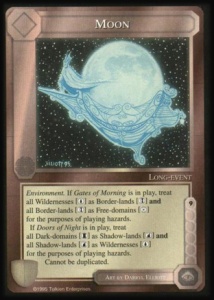 Though one of the objectives of this scenario is to defeat a substantial number of hazard creatures, you will want some resources that help you in avoiding certain hazard creatures. Several of the sites you will have to visit force you to draw a large number of hazards (10 for Easterling Camp and Variag Camp; 12 for any site in Núrn!), which means that your companies will likely be overrun at times. Avoiding some of these attacks means your company will be more likely to survive! Thus, though in this scenario you cannot keep avoiding hazard creatures, a few Dark Quarrels let you live another day, even if it can’t form the basis of your strategy.

Obviously, your hazard deck should contain a fair amount of Orcs and Trolls. Sauron may have lost the battle, but his hordes still roam the lands east and south of Mordor, and your heroes have to help restore order there. There are plenty of Orc hazards to choose from, but make sure that these hazards are playable in Shadow-lands and Dark-domains. Orc hazards that can be played in both these areas as well as wilderness are ideal, since it means you will be able to play them against your company even when you have Fog or Moon in play, or even if you venture beyond Shadow-lands (when you travel to a Haven, for example). 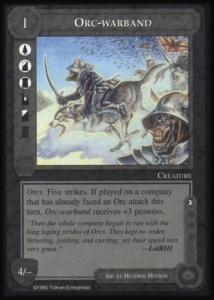 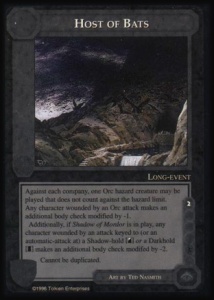 For other creature hazards, you can include some Trolls: Olog-Hai (Trolls) are potent but not too deadly (and give 2 MP when defeated), and Half-Trolls of Far Harad is too thematic not to include. Apart from these, you can also add some Men (not all will be happy with the coming of the agents of Gondor!): Brigands, Lawless Men, and Sellswords Between Charters are obvious choices. 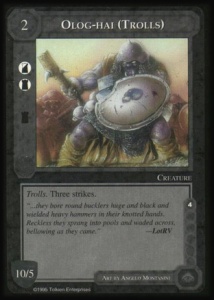 Mûmak (Oliphant) is a good thematic hazard creature to include. Marsh-drake can be played at both Shadow-lands and Coastal Seas: it can be hazardous when you are roaming in the east, but equally so when you seek refuge in Edhellond (and have to pass through at least 1 Coastal region). Wild Fell Beast is a powerful hazard that you won’t be able to play very often (since it requires a site path with two Shadow-lands), and so won’t be able to wipe out your company every time you draw it. Sand Drake, which has 3 strikes of 12, can be played in Nurn and Horse Plains. A few Undead hazards would not be out of place either. 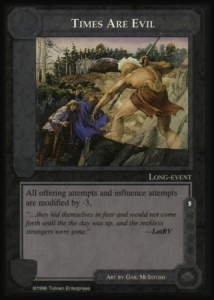 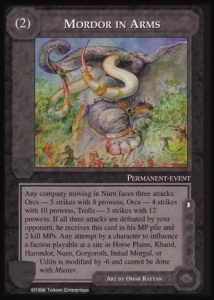 There are other hazard events that will work well in this scenario. Awaken Minions, Arouse Minions, and Incite Minions all affect automatic attacks at Shadow-holds and Dark-holds. Night affects Dúnedan (of whom you’ll likely have a few in your company). Foul Fumes Morgul Night forces characters travelling through Shadow-lands or Dark-holds to return to their site of origin. Morgul Night turns Wilderness into Shadow-lands, and Morgul Rats can prove deadly to a company at a Shadow-hold or Dark-hold. In Darkness Bind Them lets you play any Dark-domain or Shadow-lands creature to most of the regions you will be travelling through. 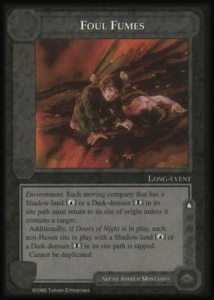 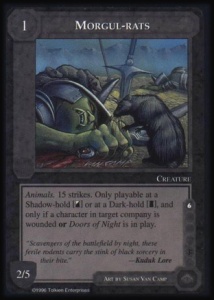 No Nazgûl may be played in this scenario, and no cards referring to Sauron may be used—they have all been defeated.

One thought on “Where the Stars are Strange”